tl;dr: Really janky beginning, but once in the groove, very awesome

Pairing the Apple Watch is an incredibly slick experience that eschews the mundanity of picking from a list of nearby Bluetooth enabled devices. It displays a unique, animated pattern on the screen that is then captured by the camera of your phone.

At that point it does a sync process where it moves over some of your iPhone preferences, like favorites from Contacts. This is probably the driest part of the setup experience. It even tells you that it will take a while and that you'll get a notification letting you know when it is finished.

I'm starting with all the 'bad' stuff at first because I think it's important to not gloss over the issues. Apple Watch is by no means a perfect product, but I think it's impact is significant on wearables and mobile technology in general.

One of the biggest features that I wasn't able to really experience the first time I used Apple Watch revolved around messaging. I was really interested in Digital Touch, the ability to send a finger-drawing to another watch user. My assumption was that you had to 'favorite' that person in your contacts in order send or receive these kinds of communications. I favorited them in my contacts and waited for them to show up on my watch. I waited. And I waited. And I waited. I was quite frustrated. I favorited this person's email, phone, FaceTime--EVERYTHING--to get them to show up on my watch. Nothing worked.

Turns out, you have to go into the Apple Watch app on your iPhone and add them to your 'friends'. OK, then.

Now that they were showing up, I immediately sent my first Digital Touch. I sent him a text to see if he had received it. Nothing. I 'tapped' him, sent another Digital Touch, and even in desperation sent my heartbeat. Still nothing.

I sent it to another friend. Nada. I setup my wife's watch. Zip.

I could get their touches, taps, and heartbeats, but no matter what they could not get receive any of those personal messages. I even reset my phone and watch to see if a swift boot to the head would help. Bah.

This morning, I scoured the Apple support community and found some people with a similar situation. What they did was turn off iMessage and reactivate it. Tada! Everything started working all of a sudden.

What I really like about this form of communication is the ease with which I can send little tidbits of information that let these people know that I'm thinking about them without having to form words or a well thought-out message. I can just tap, doodle, or send my heartbeat. It sounds really silly, but I think these are pretty novel uses of the device. Technology has a way of dehumanizing us, but I think these features are a big deal in helping us reconnect in places and in ways that would be difficult to do otherwise.

Apple Watch naturally lacks a soft keyboard and not all interactions can be performed by buttons or simple phrases. In order to activate Siri, all you have to do is hold up your arm and say 'Hey Siri'. You then speak what you want as you would on any other Siri capable device. The biggest problem with Siri on Apple Watch is that she's really slow. I suspect that this is the case because almost none of the processing is performed on the watch itself. This means that there are delays between processing what you want, as well as being very slow to transcribe dictated messages. This is a bit frustrating because your arm really does get tired holding it up and rotated towards you. If at any point you put your arm done, it stops most everything that you're doing.

One other pain point is that I feel that the transcription is not as accurate. I'm not sure why this would be, but perhaps the microphone is not as good as what's in the phone.

Despite these issues, I found myself frequently using Siri and in most cases the transcription or intent was communicated well enough for both of us to understand what I needed.

I was driving somewhere this morning and received a phone call from a friend. I decided to answer it on my watch to experience call quality in a real life situation with ambient noise. It was cool to be able to answer the call in the car, but I could not really hear the caller very well at all. Since I was driving, I didn't spend any time trying to make the volume louder--if you can even do that at all.

When I arrived at my destination talking on a watch was awkward and downright bazaar. Again, you can't hold your arm up for very long without getting tired. I'm not sure that Apple intended for extended conversations to occur on the watch, but I was grateful I could quickly handoff to my phone where it felt so much more natural.

This is where I feel like Apple Watch currently shines. I love getting notifications on my watch because it lets me evaluate whether something is worthy of opening my phone and doing some extended reading. Even apps that don't have an official watch but leverage the new iOS 8 APIs get a really nice treatment here, especially with being able to be able to take quick actions on them. For example, Tweetbot doesn't have an Apple Watch app, but when a notification comes in I can quickly read what the notification is about, and for example, immediately retweet it from my watch. Pure gold.

There are some pretty significant issues with mail, but I'm not sure how to solve them for a watch. The biggest problem is that mail is more than just text. It is often formatted with HTML or rich text that do not translate well to a watch. Apple have taken the route of telling you that every time a message comes in that it just can't display on the device. Unless people or companies are sending both the HTML and plain text message, Mail isn't going to work very well for reading--at all. 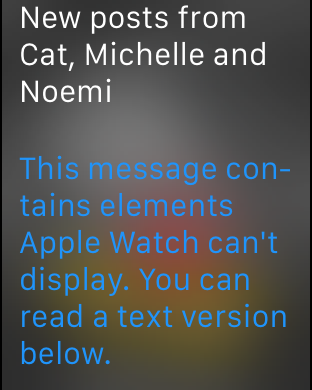 Fortunately, I can usually tell by the subject line whether something can be archived or marked for review later. But I would neither sit down and read mail or go through my usual mail workflow except on my phone, tablet, or MacBook. Too long, too cumbersome, and not a good fit for the device. This isn't an Apple problem; it's an issue with the medium. Mail is not a good use case for wearables--not right now, at least.

I keep bouncing from one face to another. Honestly, I can't find one that has a blend of style and capability that I like. I don't care for analogue faces too much, because I can't glance at dials to know the time. That said, I'm currently sporting Mickey with a World Clock 'complication' with the digital equivalent. I put it in the corner, because if I did it at the bottom, I find myself frequently accidentally brushing it causing the watch to load the World Clock app. I put the battery life at the bottom because accidentally touching it doesn't do anything, but more importantly, I'm currently interested in the battery life. 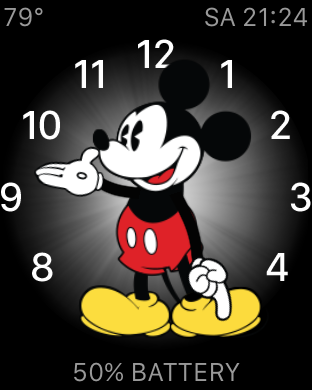 During setup the process asks to install all available third party apps that are Apple Watch-ready. I opted out of this, mostly because I wanted to use my watch sooner, but also because I feel like my watch has a higher bar of what makes its way on there. Let's just say that most of the ones I thought would be genuinely interesting have been crap. I'm not going to name names, but let's just say that even my employer didn't make the cut. This isn't for a lack of trying, in some case, but make no mistake, I am not throwing stones here. I think this space is just too new and the constraints too high for anything truly remarkable to be useful and interesting right out of the gate. I have high hopes for what lies ahead, but none of the third party apps I have used have been truly awesome--even the ones I have written myself.

Even Apple's apps have their own hiccups, as previously covered.

Leading up to the official release keynote, there were quite a few doomsayers out there alleging less than a day's worth of battery. I was worried about this, too, but I am greatly relieved that those fears were greatly unfounded. I have been able to go from when I woke up early this morning until I started writing this post and have yet to dip below 50%. I can see how heavy use of this device would greatly drain the battery, but my routine, casual use has shown that this watch will do a full day's worth of work without having to worry about it dying on you.

It will need to be charged nightly, but I'm not sure that this is necessarily outside of user expectation, especially since phones are the same way. I put my phone in a cradle at my desk at night, my watch goes on its charger on my nightstand. I don't feel grumbly about that at all.

Despite a lot of rough edges, I think the Apple Watch is a pretty good device. It's definitely v1.0, but what is truly remarkable is that this is a better 1.0 device than iPhone was when it debuted. I'm serious. You can already see in this device what kind of future it holds: more power, longer life, more robust software. I can't wait to see what Apple unveils for Apple Watch at WWDC, their annual developer conference. I can't wait to see what hidden potential is waiting to be unlocked in this little, personal device. And I can't wait until the next hardware revision comes out, to really see what new hardware will be unleashed to further unlink ourselves from the phone itself.