Kind of a less than ideal way to go, but given what happened, I saved a fledgling's life. It isn't likely to see it that way, but this is what happened.

One of them learned to fly today and had been going in and out of the nest. I came home and it was very amenable to me taking photographs of it up close. I took some good pics, but it eventually decided to take off. This is when trouble happened.

Its wing got horse hair wrapped around it and its neck and when it attempted to take off it immediately became arrested and was unable to take flight. It was flapping around below the nest, unable to really go anywhere. The commotion was such that its two siblings immediately darted from the nest, one right of the other. Meanwhile, the stuck one going crazy trying to escape the unseen trap it was in.

I immediately darted out with a stool, trying to understand what exactly was going on and discovered the thin, but strong hair arresting it's flight. I was able to gently grab the fledgling despite its frantic nature and I tried to tug on the line that was wrapped around its wing and neck. It would not give. So I pulled from the other side up into the nest where it was firmly anchored. In the video below, you can see some of the nest material pulled out as I tried to break it. Eventually it gave.

At this point I carefully unwound the hair that was wrapped several times around its wing and neck until I saw that the hair was going into its mouth. I carefully pulled until it came loose and it was free. I attempted to place the fledgling back into its nest, but it was too freaked out at this point. In the ensuing moments it knocked down the wide angle lens of my birdcam. As soon as I had cleared my hands from the lip of the nest, it darted out and away.

You can see what happened here:

In retrospect, I'm not sure how things could have gone differently. I don't think it would have been a good idea to leave it there to break its wing or worse, die right outside my front door. I am a pretty strong advocate of letting nature take care of itself, but in this case I feel justified in intervening.

I am leaving the nest up in case they decide to come back; with the horse hair removed this shouldn't happen again.

UPDATE: One of them has returned with both parents.

UPDATE 18:16: Looking at this photograph I took before this all happened, you can see the hair going into its mouth: 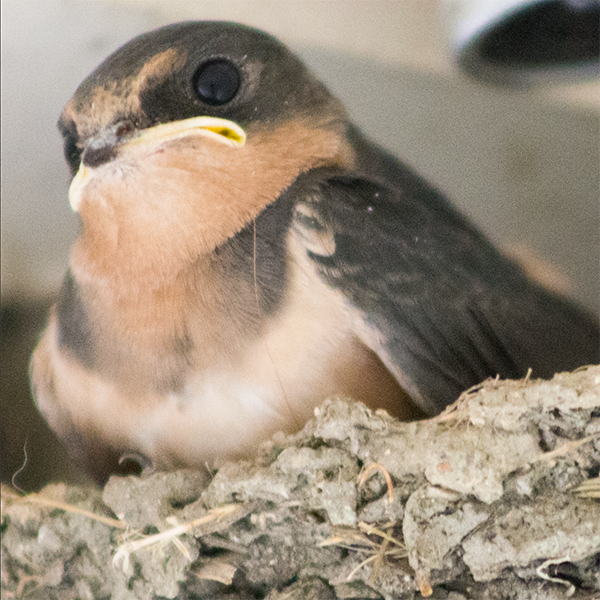 When taking this photo, I noticed it opening and closing its mouth like it was chomping at something. I couldn't see the hair from the distance I was at. I thought this was odd behavior, but thought that maybe it was trying to catch an errant fly or something I couldn't see up in the nest. Little did I know that it was gagging on this hair or otherwise trying to figure out how to chomp it down. :(