Learning how to develop on iPhone/iPad can be a painful experience with a steep learning curve, especially if you're new to Objective-C. There are a lot of tools that Apple provide to help lessen this curve, but sometimes beginners bump into problems that are difficult to solve, if only because the error information is less than informative to the uninitiated. An example of this involves the use of XIBs or Storyboards.

With a drag-n-drop UI, Interface Builder simplifies the creation of application screens and is very attractive to those wanting to hit the ground running on this exciting platform. Having taught intro classes for iOS for a couple years now, I can count on one or two people in each of my classes hitting a major barrier in troubleshooting an app that is crashing: the dreaded NSUnknownKeyException.  You'll get console output that looks something like this:

What The Problem Is

At runtime your view controller is going to get deserialized from its XIB/Storyboard. During this process, it's going to read all the objects that are in your IB files and start instantiating them with an NSCoder. As it is instantiating those objects in your view, it's going to read the IBOutlet and IBAction connections in your storyboard and start assigning the hydrated objects to those properties that were connected at design time so that you have programmatic access to them at run time. But here's the kicker: If you have a connection that points to a property that doesn't exist, then this exception will be thrown because it was told a property was there that really isn't.

This problem manifests itself most commonly when a connection is created, but the programmer goes into the header and changes the property name. What's happening is that the runtime is expecting to set a property of a given name on your view controller, but that property no longer exists (because you changed it).

How to Fix It

In your storyboard/XIB, right click on the view controller to view its IB connections: 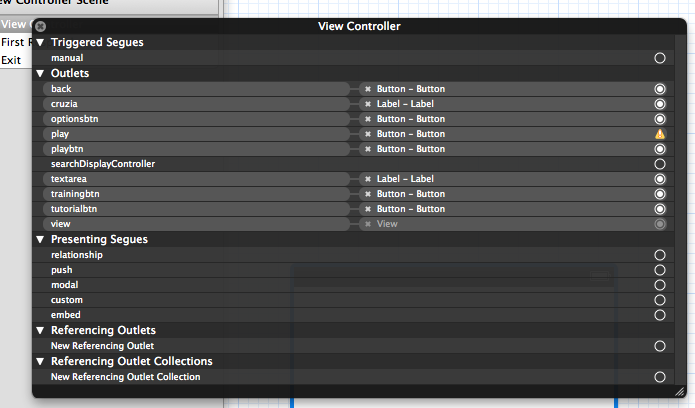 See how there is a connection for the property 'play' and it has a little yellow triangle next to it? This is Interface Builder trying to warn you that you have a connection set there, but the header isn't showing that there is an IBOutlet of that name.

All you need to do is click that little x to break the connection to the missing property.